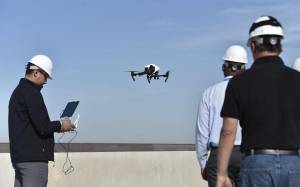 With their ability to cut costs, labor and injury, drones have become go-to tools for commercial contractors. Now these unmanned aerial systems are invading the residential contracting market and new services are making it easier than ever to tap their potential.

One of the first places drones (sometimes called UAS) have made their mark in the residential world is with roofing contractors. Though many use services such as EagleView, which uses aircraft to capture aerial imagery, some are starting to use drones for more specialized work.

“Drones make it extremely easy to fly up and take a look at what’s going on up there and see if there’s a problem with chimneys or leaks,” said Chris Harper, president of Harper Construction Inc. “It just saves a lot of time.”

But it’s not just roofs where drones save Harper time. He also uses drones on tall houses to inspect siding and windows. “It’s really more of a time-saving tool than anything,” he said. “It saves us all the trouble of hauling around a 40-foot ladder — and it’s a lot safer.”

Harper estimates the same job a drone does in about 30 minutes would take two workers several hours to a full day to complete, depending on the job. Plus, he can show those same videos and photos to customers before and after a job. “It’s nice to show the customers what they’re getting,” he said. “A lot of people won’t climb up on their roof.”

And like other contractors, he’s well aware of drones’ safety advantages. In fact, falls are the No. 1 cause of death in the construction industry today, according to OSHA. Drones take that problem off the table. Already, Harper said he uses drones on as much as 15% of his jobs, and he sees that number climbing as he become more skilled at capitalizing on all the potential drones offer.

However, Harper is the first to admit that there’s a lot more to operating drones than simply buying one off the Internet. “There’s a learning curve to drones,” he said. “You’re not just going to grab one and fly it around your job site.”

In addition to the learning curve, commercial drone use requires an FAA license and certification. “You have to basically know the same material that a commercial airline pilot would need to know,” warned Derek Waleko, owner and founder of Up Sonder, which just launched in March and bills itself as the Airbnb of drones. “It’s hours and hours of studying.”

Contractors caught flying a drone without proper certification could face FAA fines. These fines range between $400 and $5,500 (with one outlier at $1.9 million), according to enforcement letters obtained by Motherboard using the Freedom of Information Act.

Waleko and other drone service companies are aiming to take the skills, training and potential fines out of the equation and simply make it easy for contractors and other to use drones. These services basically link qualified drone pilots with pros who need their skills and hardware.

“Flying a drone is not easy,” Waleko said. “Being a contractor and being a drone pilot are two different disciplines.”

But Waleko’s pilots aren’t just drone operators, they’re also capable of taking drone data and turning it into powerful sales tools. For example, Waleko said drone footage (videos and photos) can be used to change out the color of siding, doors and windows. It can even be converted into virtual reality, which allows clients to “see” the changes in the virtual world before they happen in real life. “That’s really the game changer there,” he said.

And thanks to the march of technology, getting those high tech marvels are faster and easier than ever before, he said. “Things that used to take weeks now take days,” he added.

So how much does using a drone pilot through a service such as Up Sonder cost? As with most things, the answer depends. But Waleko said on average customers spend between $500 to $1,000 for basic 3D modeling, photos and videos. Adding VR to the service sends the price up from there. By comparison, Harper spent $1,200 for his DJI Mavic Pro drone. Another drone service that seeks to rent drones to qualified pilots called Blue Skies Drone Booking offers a DJI Inspire 1 drone for three days of use at $200.

Where Up Sonder seems to differ is combining drone piloting with data capture and manipulation. “We can offer white glove service to help them facilitate everything they need,” Waleko said.

However contractors decide to work with drones, it’s only a matter of time before the machines take over a number of roles, Harper and Waleko agreed. “The whole reason the drone economy is coming like a tidal wave is because of the cost savings. They’re getting smarter, faster and more efficient,” Waleko said. “The skies are going to be different in the years ahead. It’s going to be common place to see drones flying overhead.”

By Gary Thill, an award-winning freelance journalist based in Portland, Ore.

26,052 thoughts on “Freelance Drone Jobs Are Leading The Drone Revolution”