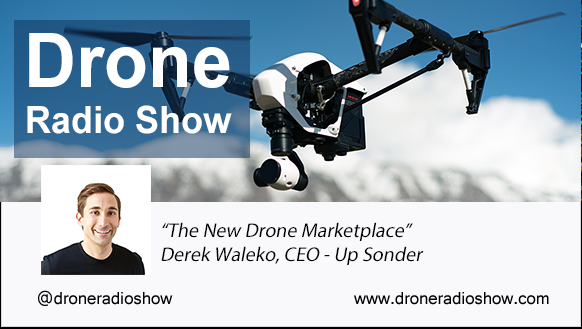 Introduction. Derek Waleko is the CEO and co-founder of Up Sonder, an on-line marketplace for drones and drone services.

Distinguishing Features. Up Sonder differs from other on-line marketplaces by: (a) On-demand drone delivery capabilities with UberRush; (b) Free insurance to drone owners offering their drones for rent; (c) Guarantee protection of drones up to $2,500; and (d) Cash back programs for the Parr 107 certification and the $5.00 for drone registration.

Demand Side: Renting a Drone or a Service. Up Sonder members can rent a drone on-line from someone in their local area. With UberRush, the drone can be delivered within 30 minutes. The service provides opportunities for people to use drones without having to purchase one themselves. It gives beginners an opportunity to try out a drone or several drones to compare and contrast before buying one. Vacation travelers can also rent a drone while traveling to reduce their carry-on needs. If a person want so hire a commercial drone operator, they can also do that with Up Sonder.

Supply Side: Drones for Service & Drone Rentals. Derek discusses how people who have a drone can make money by renting their drone on Up Sonder. Commercial operators can market their services, as well.

Requirements. Individuals that are marketing drone-for-service on Up Sonder must have a Part 107 Certification. Drones that are to be rented must be registered with the FAA.

Insurance. Derek discusses the insurance requirements and options for members using Up Sonder.

Fast Drone Deliveries – UberRush. Up Sonder uses UberRush to deliver drones to members, providing drones to customers in as little as 30 minutes. The service is only available in New York, Chicago and Los Angeles, where UberRush currently is operating. Up Sonder will expand as UberRush expands into other cities.

Company Origin and Challenges. The word Sonder is an anagram of “Drone”. Derek wanted a company name to reflect a positive image of drones. The greatest challenge in getting the company off the ground was addressing the insurance requirements. It took several months for Up Sonder to successfully secure insurance

Geographic Roll Out. Up Sonder is only available in the three cities where UberRush operates. But Derek foresees expansion to other areas in the coming months. He encourages individuals to register with the site so they’ll be informed of upcoming plans and roll-out of services. There are no sign-up fees.

Key Questions. Most prospective Up Sonder members have questions related to the insurance converage and safety. Up Sonder has an extensive list of Frequently Asked Questions for anyone that wants more information on these and other areas. The company also has a Provider Guarantee and a Renter Refund Policy, which is described in the company’s FAQs.

Start-Up Phase. Derek was a senior government advisor in charge of mergers and acquisitions at South Korea’s KOTRA agency, where he worked with many high technology companies in the aerospace industry. He got the idea for a drone marketplace after learning that the most popular way to rent a drone was through Craig’s List. He felt there had to be a better way. The company was formed in October, 2015 and by January, 2017, Up Sonder completed its first successful UberRush drone delivery.

Next Steps. For the next six months, Up Sonder will concentrate on expanding the U.S. Market. Long term, Derek sees an opportunity to expand into the drone energy and delivery areas. As line-of-sight operations are approved there will be a need for longer flights. To facilitate this, when a person signs up to Up Sonder, they are asked if they own their home and would be interested in leasing their roof in the future for a drone docking and charging system. Additionally, the company hopes to eventually get involved in the consumer-to-consumer drone delivery business.

Up Sonder Life and Clean Drinking Water. Clean drinking water is a major concern for many developing countries, where more than 1 billion people do not have access to this resource. Addressing this need is one of Derek’s greatest passions. As such, Up Sonder donates a portion of the profits of every transaction to this Up Sonder Life initiative.

Closing. Derek hopes that Up Sonder will have a lasting impact in the efforts to provide clean drinking water for regions in need throughout the world. Mentioned Links

13,428 thoughts on “The New Drone Marketplace – Derek Waleko, CEO of Up Sonder”