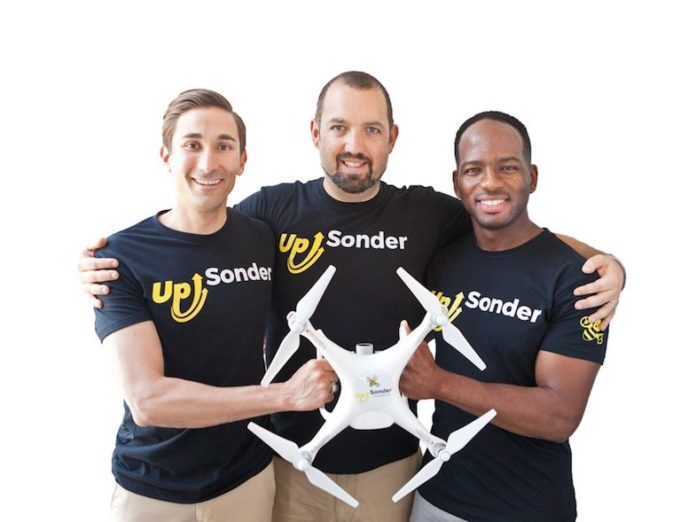 A startup called Up Sonder hopes to change the world, one drone rental at a time. This peer-to-peer drone marketplace allows drone owners to list their drones and drone services for rent by those looking to fly.

It all began after Derek Waleko learned that someone he knew was going to rent a drone — from Craigslist.

“I just couldn’t believe there wasn’t someone out there that was linking these in a very professional, easy, streamlined way,” he says. “That exact same day, the light bulb went off in my head.”

And so in 2015, co-founders Waleko, CEO; Isaac Nabors, COO; and Keith Smith, CTO, formed Up Sonder. The service is currently available in Chicago and launches in
New York City on Sept. 13, and San Francisco on Sept. 21.

“We really want to show the world that drones are fun — I mean, they’re hella fun, oh my goodness,” says Waleko.

Currently in beta, Up Sonder (US) is only open to providers to list their drones and/or service at this time. If people want to list their commercial service on the site, they must prove they are Part 107 compliant.

Listing on the site is free and providers are reimbursed for their $5 registration fee. Commercial drone service providers are also compensated the $150 fee for their Part 107 aeronautical knowledge test — as long as they can provide proof they took the test on or after Aug. 29.

Both commercial and consumer-level drones of all price points are eligible for the service. “We don’t want to lock anyone out of the system,” says Waleko.

Providers can rest easy thanks to the company guarantee, which states that if their drone is damaged, US will pay up to $2,500. Similarly, if a renter is displeased, there are three cancellation policies that are favorable to both renter and provider.

“If you’re a part of the Up Sonder family, we want to take care of you in every way possible,” says Waleko.

For hobbyists and enthusiasts, Nabors says listing their drone is a great way to have the “drone pay for itself.” If someone is looking to use a drone without dishing out big bucks, then renting might be the right fit.

Renters and providers will have ratings, similar to Uber’s rating system, for quality assurance. Providers can also question renters on their experience with drones and will ultimately have the authority to accept or decline a renter.

While US makes recommendations as to rental pricing options, drone providers set their own pricing and keep about 95% of the rental fee.

But before entering beta, the company had to overcome a logistical hurdle — transportation. Although the founders took inspiration from Craigslist, they didn’t like the thought of people having to meet up to exchange the drones. They found their answer with UberRush.

UberRush connects businesses with couriers to make deliveries to the consumer.

Using Uber’s tech, renters and providers don’t have to meet — Uber will make all the deliveries and pickups. Waleko says people are still able to meet up if they wish, but it is not required,

“The provider and renter really don’t ever have to meet,” says Waleko. “It just all works through their cell phone, through text messaging, and it just arrives at your doorstep, you walk out, and you have a drone.”

Typically, UberRush deliveries are picked up from one place (like a restaurant), but with Up Sonder there is no one central hub. All drones will stay with providers, and when a rental is placed, Uber drivers will pick the drone up and drop it off to the renter. Once the rental period has ended, the drone will be returned using the same process.

“We’re seeing that possibly you could have a drone in your hand in as little as 30 minutes,” Waleko says.

The US team expects others to follow their lead, but believe they’ll stand the test of time and be the trusted brand for drone and service rentals.

At this time, the US service is only where UberRush is available (Chicago, San Francisco, New York City). Waleko says a nationwide launch is not far behind and he has full confidence that UberRush will expand quickly and aggressively.

However, a drone-sharing revolution isn’t the only thing the startup hopes to accomplish. As US flourishes, the founders hope to create a nonprofit that will help make water more accessible to people across the world.

But for now, drones are its specialty, and Waleko hopes the general public will begin to realize that drones can be used in ways that aren’t necessarily obvious ― like playing fetch with your dog. In fact, every Sunday, Waleko takes his dog to a local park. But instead of throwing the ball himself, he uses a drone with a tether to drop the ball to his furry friend.

“We really hope that the conversation happens with the general public saying, ‘Huh, I didn’t know I needed a drone until now,’” he says. “It’s going to be an ‘Ah-ha’ moment for the public, and we hope to be a part of that conversation.”

Sign up to be a provider here, and keep your eyes peeled for when you can rent a drone with the click of a button. Oh, and it’s OK if you need to brush up on Part 107.