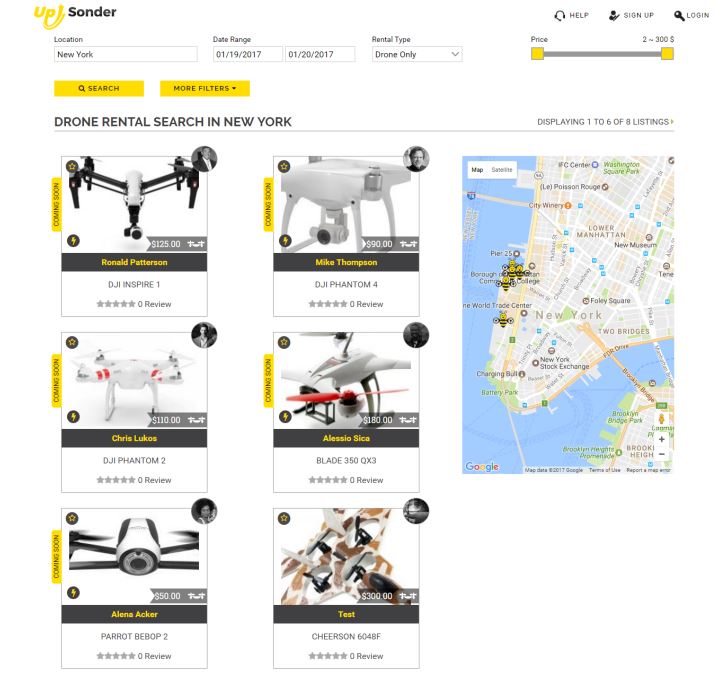 The on-demand drone rental marketplace Up Sonder, which launched its beta for service providers in September 2016, is open for business. Up Sonder (US) allows drone owners to easily list their UAVs and services for rent to the public.

Customers receive their rental via UberRUSH, an on-demand delivery platform. US is the first and only drone company partnered with UberRUSH.

Cofounder and CEO Derek Waleko says there are currently over 500 US users in over 220 cities across the U.S. and 100 drones listed on the website. But here’s the caveat: UberRUSH’s service operates only in Chicago, New York City, and San Francisco. That means US only operates in those three cities and there are people signed up that can’t use the service — yet.

“Our limitations right now are with where UberRUSH provides its service, but we’re working on solutions,” Waleko says. “I think and I hope we’ll make a lot of headway before the first quarter of 2017 is over with.”

On Jan. 16, the US team conducted test deliveries to the TechCrunch office in San Francisco. Each test delivery was made within a five-mile radius and made it to renters within 30 minutes or less (so did the other tests in Chicago and New York).

During the first round of beta tests, US looked at the timing of each delivery and the customer messaging system. And don’t worry: It took care of duplicate messages notifying users that their Uber order was fulfilled. Thank you, engineers!

Besides that slight hiccup, Waleko says that “the overall reaction is that this thing works and is super cool.”

Whether you’re looking to fly a drone for fun or put a drone to work, Waleko says you can find a drone for the job at upsonder.com. Booking a drone and/or service is easy: Just search and compare local drones and services in your desired area on the website. You can quickly pay for your rental through all major credit cards and even Apple Pay.

“Ordering a drone with Apple Pay is fun,” Waleko says. “It’s just amazing how simple it is. You just, thumbprint and you get a drone.”

Despite the simplicity for users, US works hard to maintain the service’s safety and security.

According to the FAA, it’s legal for someone to fly another person’s FAA registered drone: “If another person operates your UAS, they must have the UAS registration certificate in their possession. You can give them a paper copy or email a copy to them.” Federal law requires drone operators to show a copy of the UAS’ registration certificate (either an electronic or printed version) to Federal, State, or local law enforcement if asked.

Up Sonder works closely with the FAA and uses the Airmen Certification Database ― an online database updated monthly that includes information on both manned and unmanned licensed pilots ― to verify Part 107-certified drone pilots.

The company also has a Renter Refund Policy: Three standardized cancellation policies (Flexible, Moderate, and Strict) that are chosen by providers.
Providers

Providers have the freedom to set rental fees, decide who to rent to, and decide the refund policy (Flexible, Moderate, or Strict) all within the platform.

The company also supplies providers with some peace of mind with its automatic $2,500 Provider Guarantee (protects their drone and equipment from accidental damage) and optional $1 million Provider insurance policy (covers only the provider, but can opt to use personal insurance).

Do take note: All drones listed in the marketplace must have an FAA registration number, and all drone operators listing their services in the marketplace must have a Part 107 remote pilot certificate or an active COA under their Section 333 exemption. Don’t have either, but want to list your drone and/or service? Up Sonder will reimburse the $5 FAA registration fee and $150 Part 107 Knowledge Test fee (be sure to read the fine print on the Up Sonder website, as there are some requirements to ensure you get refunded).

Up Sonder is preparing for a “drone superhighway”: When providers sign up for to list their drone and/or services, they’re asked whether they’d allow a drone docking station to be added to their rooftop.

Up Sonder
Always looking ahead

While US just launched its on-demand drone rental marketplace, the team is actively working on what’s next.

“We really do feel that we’re going to be growing aggressively and gaining a lot of market share in the U.S. in 2017,” Waleko says. “We have every confidence that were going to be servicing the entire U.S. by the end of 2017.”

The company has its eyes set on going international soon, too — it is currently targeting markets in Ireland, Australia, and Europe. Even though Up Sonder isn’t currently available everywhere, people outside the current scope of operations, whether in the U.S. or living internationally, can still sign up for an account.

Working with software company AirMap, US is creating its standalone app and “Up” ― a micro-app that focuses on getting “real, authentic data about places where people are flying.”

He believes the FAA will implement a division of airspace specifically for drones in less than 10 years. Those who know the true status of commercial drone delivery might be shaking their heads, but Up Sonder has begun the hunt for rooftops to serve as docking stations for the forthcoming “drone superhighway.”

“Where we were birthed and where we started was drone rentals, but we’re really expanding past that,” says Waleko.

Oh, and if you’re on the company’s website and you keep seeing “bee” in place of the word “be”, you’re not going crazy and it is not a typo. Up Sonder’s mascot is a drone worker bee named Sonder and the company has found a way to have a bit of fun with it.