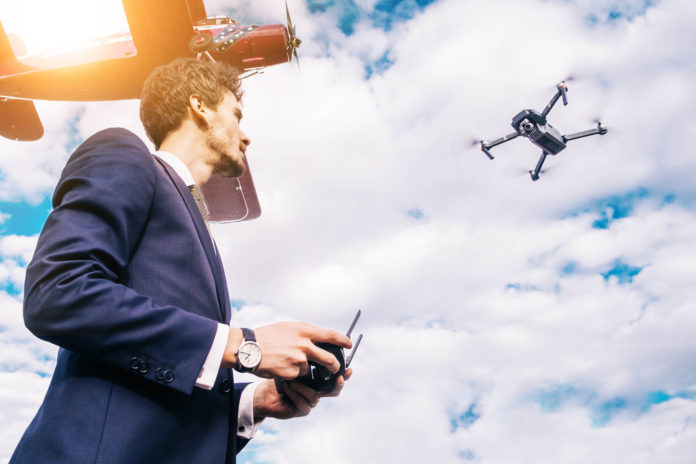 Last week, I wrote about how the groundwork is being laid as we speak for a drone superhighway. If you haven’t already read part one of this four-part series be sure to go back and start at the beginning. This week, we’ll look at a drone traffic management system and legal hurdles to a drone superhighway. So without further ado, let’s get down to business.

What exactly is a drone traffic management system? Like the aircraft management system currently in place for the thousands of planes that fly through US airspace every day, it’s a way to track and safely manage drone flights.

But managing drones presents a number of hurdles. First, there will be many more drones in the sky than planes. Second, traditional tracking methods like radar and transponders don’t work well with small unmanned drones. Luckily, NASA is hard at work developing the groundwork for UAS Traffic Management (UTM). NASA currently has six active test sites throughout the US and has partnered with companies like AirMap, Skyward and AeroVironment to research and test solutions. NASA is on track to finish by 2019 and then hand their findings over to the FAA for implementation by 2025, right around the same time Elon Musk will be landing people on Mars.

As we mentioned in part one of the series, all this work will be part of the FAA’s Next Generation Air Transport Control System (NextGen) that will give planes, drones, helicopters and anything else in the sky the ability to communicate directly with each other and traffic control systems through data comms. The FAA is also developing special rules on how drones will operate at low altitudes through controlled airspace. Right now, the FAA is working on developing something called Low Altitude Authorization and Notification Capability (LAANC). It’s a terrible acronym, but an awesome idea! Here is how a LAANC will help:

This is amazing, but how will the average drone pilot interact with automatic authorizations? One answer is AirMap who has a powerful app that lets a drone pilot submit a digital notice to an airport. AirMap leads the industry in this area and is already working with over 125 airports across America. To see an example take a look at the video below.

Sneak peek at a rendering of Up Sonder’s future app.

Up Sonder is committed to making these advancements available to our users, which is why we are in talks with AirMap to design and develop an app that will integrate the mapping and notification abilities of AirMap with the drone marketplace of Up Sonder. (Keep your eyes open for updates on this!)

Efforts to build drone management systems are also well underway the world over. In Singapore, the government and researchers are pushing to test their drone traffic management system which includes dedicated virtual lanes and geofences to keep drones out of certain areas by the end of 2017. In China, eCommerce giant JD.com has partnered with the northern Chinese province of Shaanxi to set up a low altitude drone logistics network covering the whole province. According to reports in Chinese media, this logistic network will monitor and control the flight of everything from small drones to large transport drones.

I’m sure you’re as excited as me to see what the FAA starts to implement by 2025. Just remember that the FAA’s job is not a simple one. This March, at the Unmanned Aircraft System Symposium FAA chief Michael Huerta said, “Our challenge is to find the right balance where safety and innovation co-exist on relatively equal planes. As we move toward fully integrating unmanned aircraft into our airspace, the questions we need to answer are only getting more complicated.”

Without getting into too much legalese, we need to talk about the law for a minute. The drone superhighway needs a unified legal framework so it can properly operate. If the FAA has one set of regulations and states and cities have another set of regulations, it’s going to get messy real fast. While technically speaking the FAA has jurisdiction to regulate all aspects of civil aviation, this hasn’t stopped local authorities from setting up their own drone laws…because surprise, surprise there are some gray areas!

Today, we have a situation where there are over 130 local laws (and much more proposed) in addition to the federal regulations from the FAA. Why would a city want to make their own drone law? In most cases, it ends up boiling down to safety and privacy concerns. Unlike other aircraft, the general population still understands very little about drones and these unknown machines are operating in close proximity to humans and their property. This is why a lot of local authorities feel it is prudent to make their own laws and regulations about drones. Luckily, many are reasonable like the recent law passed in San Diego. Their newly passed law basically takes the FAA regulations for drones and makes them a San Diego city ordinance so police can have a legal basis to issue citations and fines for improper uses of drones.

Other local laws go beyond the scope of FAA regulations and this is what has the potential to create legal hurdles to fully implementing a drone superhighway. For example, Allendale, New Jersey prohibits commercial drone flight in any airspace below 400 feet unless you are directly over a property where you have permission to fly. The city of Orlando, Florida requires a permit to fly a drone which costs $20 per event or $150 per year. If you are caught flying a drone without a permit you will get fined between $200-$400. Then, there is the proposed law making its way through the Oklahoma Senate that would allow property owners to shoot down a drone without risk of a civil penalty.

It’s going to be tough to have a functioning drone superhighway if property owners can blast drones out of the sky, or local towns refuse to allow drones to operate below 400 feet. In order to avoid a situation where there is a patchwork of local laws and regulations on drones, states and municipalities need to communicate with the FAA and follow the guidelines which have already been issued to help local authorities create laws that are in line with their larger plans to safely integrate drones into the national airspace.

Next week in part three of this series we will look at beyond-visual-line-of-sight (BVLOS) drone operation, the possibility of fully autonomous drones, and how Trump administration policies could be used to advance the drone superhighway.